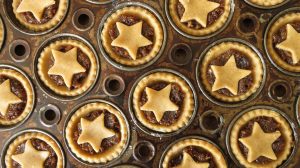 Zest and juice of an orange

zest of an orange

115g butter, frozen. Plus a little extra for greasing

Add all of the ingredients above (other than the brandy, if using) into a large saucepan over medium heat. Stir

When the butter is fully melted, turn the heat to low, cover and cook for 15 minutes, stirring often.

Take the saucepan off the heat and stir through a Tablespoon of brandy, and decant into sterilized glass jars.

Leave to cool with the lid slightly ajar, then secure tightly and store until you’re ready to use.

Put the ground almonds and coconut flour in a bowl with the sugar, baking soda and salt. Stir in the orange zest.

Grate the frozen butter into the flour and mix together with your fingers till a crumb forms.

Stir in the egg and bring together with your hands to form a dough. Divide the dough in half, wrap each in film and place in the fridge for 1 hour (or overnight).

Pre heat the oven to 175˚C. Grease the moulds of a muffin pan with a little butter.

Remove the dough from the fridge and place between 2 sheets of baking/ greaseproof paper. Roll with a rolling pin to flatten out the dough till it is pie-crust thin.

Using a cookie cutter (or an upturned jam jar – needs to be about 8cm diameter) cut out 25 circles and lightly press into the muffin pan moulds. The pastry can be tricky to work with as there is no gluten holding it together. Be patient. If the pastry splits just push it back together with your fingers and use any pastry scraps to fix it up.

Fill up each pie mould with a heaped teaspoon of the mincemeat. Using the remainder of the dough cut out 25 stars to top each pie.  Bake in the oven for 12 minutes. Leave to cool in the tins, before gently easing them out. Don’t be tempted to remove from the tin when they come out of the oven. They WILL fall apart!